Tim and I had such a fun time pulling together Porter's costume at the last minute. I intended to try and record all the random bits of odds and ends around the house we managed to cobble together to make it work, so here goes:

The skirt was some pleathery gold material, sewn on some too-small shorts, with black strips added adorned by gold painted cardboard circles. Soccer socks, water sandals, and big sister's brown tee shirt were all just worn as is. The lion crest was drawn on a jar lid by Tim and then I sewed it onto his chest straps. The shoulder armor-guard was made with more of the pleathery fabric, a cut up baseball cap and felt for padding. The helmet was all Tim's creation from an old bike helmet, cardboard and a roll of gold duct tape. Colored duct tape is amazing! His net was just a yard of mashy fabric from the garment district downtown, but we did add some sinkers and weights to help it fly right when he wanted to toss it in battle. 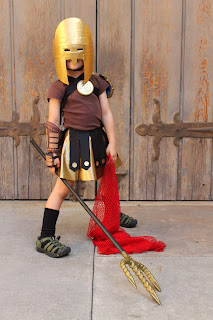 Grammy also did a pretty rocking job with her Grandmummy costume. I love this shot of her on the porch. Hers just involved lots of fabric strips, a bit of face paint and a lot of masking tape to hold her together. 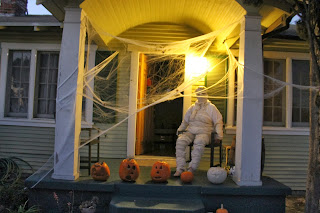 Matilda was super pleased to run into lots of friends during the loot-collecting portions of Halloween. 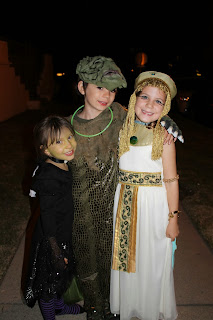 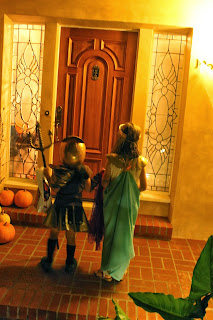 Our neighbors a few houses down go all-out-crazy with their decorations. We make a daily pilgrimage during October to visit all the fun motion activated contraptions. Then when the actual event rolls around, they get even spookier with awesome costumes. Even knowing what friendly folks they are, it took a few moments for the kids to muster the bravery to approach! 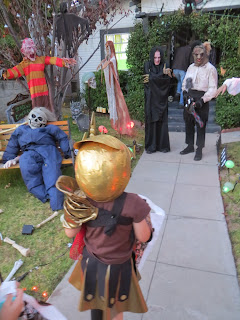