P, p,p what begins with p?
A princess party for preschool pals with pool, pizza and a pinata.
(To much Dr. Seuss around here I think.)

This was Porter's first experience (maybe ever, or maybe just that he could remember) with a pinata and he was pleased. Much later in the day he kept recounting how "I hit that thing and candy came down!" 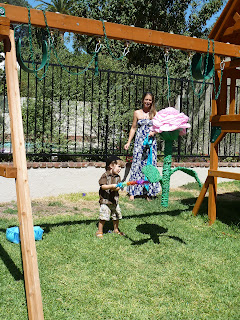 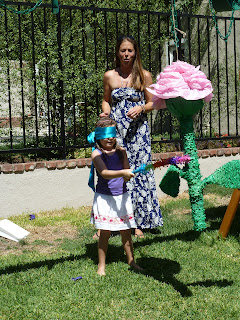 The scramble for candy was a little terrifying and there were several kids left in tears. Sweet Matilda quickly offered up some of her candy to two boys standing near her who were crying over their empty loot bags. 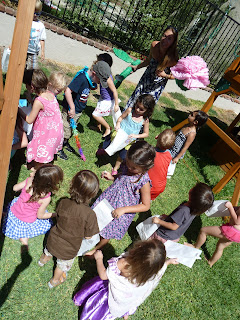 I was a not so sweet Mommy, as I tossed candy AT Porter in the middle of the fray. All the candy fell in one big pile which was quickly covered by a pile of kids, leaving many others to scour the barren grass. As one parent tried to distribute the candy a bit, Porter kept turning the wrong way and missing it. To head off a crisis from him I quickly grabbed a few pieces and tossed them over the whole crowd, aiming poorly. Luckily he was completely unfazed by the direct hit and just happy to finally have custody of a big huge lollipop. He quickly scurried off into a corner to open it.
Posted by KK at 11:52 PM