So today there seemed to be no remorse over the candy the witch took. Luckily we had a birthday party to go to so there was a new source of candy/cake! Matilda actually woke up before 6 this morning as she was so excited to check out her toy and got to squeeze in an extra hour of play with her new Cheetah doll before school.

Instead Porter has moved on to the next major kid-pleasing holiday, making wish lists. He kept himself quite occupied with circling items in the big Target toys catalog that came. Not quite the enormous tome that the JC Penney catalogue of my youth was, but it kept him occupied for a long time. 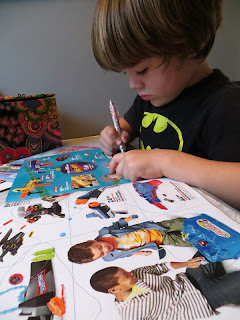