The kids both had a physical this week and were thrilled to chit chat with their beloved doctor. Porter came in at 42.5" and 43lb, 90th percentile all around. As our pediatrician pointed out, the size of your average 5 year old. We also talked with her about Porter's speech because his pre-school teachers had brought it up at the last conference. He drops some consonant sounds still and has a hard time with saying the 'S' sound at the start of a word. The pediatrician reassured us there is no need for concern at his age. She reminded us that often people have higher expectations for kids who are large for their age, expecting them to act older based on their size. 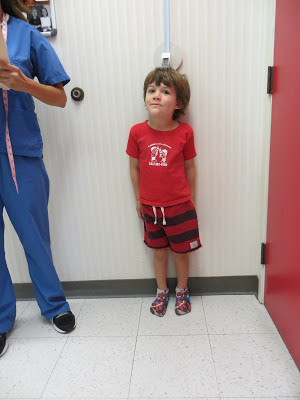 Matilda is 49" and 52lbs, which keeps her on the same growth curve as last year of 75th percentile for height and 50th percentile for weight. When she was so sick with pneumonia in January she lost a bunch of weight and had me worried but by now she has regained and is right back where she should be. 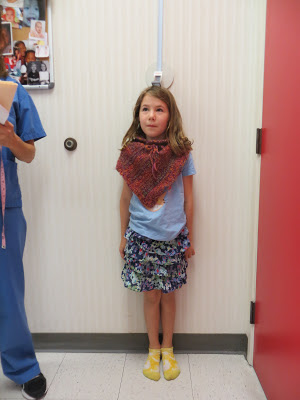 Look at those long legs! 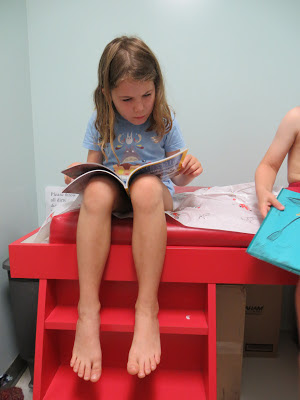 Porter will get a blood pressure check, vision and hearing screening at his next check up so he watched very closely as Matilda demonstrated those procedures. 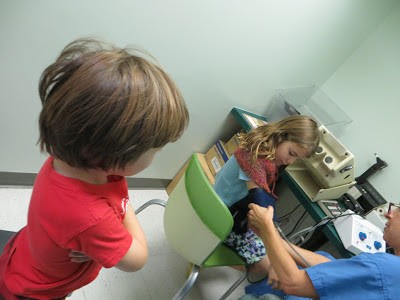 He was also super calm for his vaccines and told his sister she should learn from him how to not worry so much for shots. Matilda didn't get any this time, but gets herself worked up at each visit about the possibility.
Posted by KK at 6:15 AM