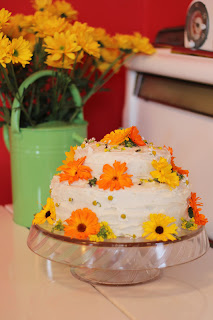 Matilda's birthday cake request this year was for a cake decorated with edible flowers. Thankfully the farmers market Sunday morning helped me fulfill that request. By the time her guests arrived Sunday afternoon we had covered her cake in arugula, rapini, chamomile and calendula flowers. 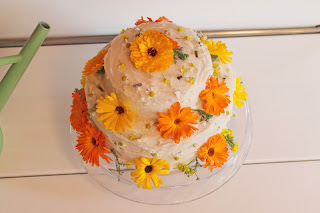 We had originally planned for the party in the park, but the heavy rain led to a location change. The hoards of kids seemed to have fun regardless of venue. Surprisingly the house fared fine. This thick layer of toys was quickly picked up and a sweep through the house recovered all of the many Nerd candies that were dropped (mini-boxes were a prize from the bean bag toss game). 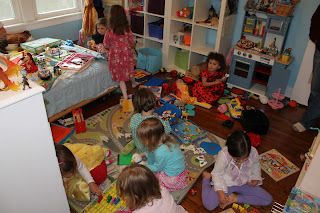 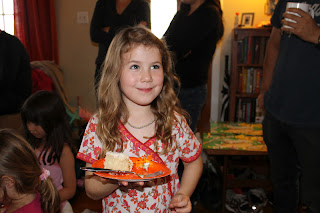 We ended up bringing our new homemade bean bag toss game into the living room. I was so excited about making this game and wouldn't let the rain stop us from chucking bee bean bags into the flower-holes. 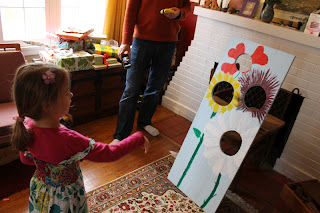 At some point we joked about getting pictures of the kids like this but somehow we did not make it happen during the party. On her own Matilda was goofing off and requested a picture from inside the sunflower. 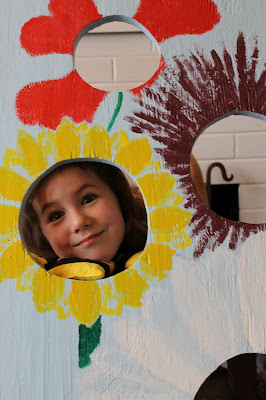 As usual, these two had a little bit of fun. 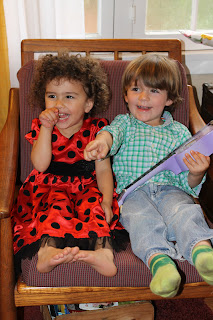 Porter is so in love with playing the bean bag toss game that when we first lined all the kids up to play he was having a coronary. Somehow he settled down and waited patiently in the line for his turn. All in all, a fun party and thanks to the rain I now have lots of fun park game ideas for the next time we throw a flower party!
Posted by KK at 9:11 PM