In an attempt to resolve some sleep-resistance-issues, I tried to provide Porter with a bit more play time and a bit less errand-running time today. We started off while Matilda was at school with taking the tee-ball set to a park. At home he's gotten so good at swinging that we've forbidden in-house tee-ball. At the park, turns out he has no use for the tee. He spent the whole time playing some kind of golf/field hockey type sport. He hit and then chased down the ball back and forth on this cement pad for 45 minutes. Very good in the tiring-out department, probably better than just fetching a ball in between tee-ball set ups. 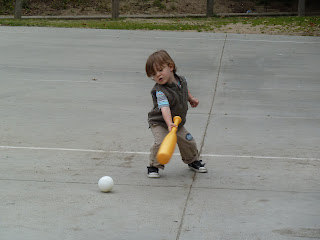 Who can resist a pile of freshly dug up dirt? Actually, Porter was telling me not to touch the diggers' dirt. Once I explained it was from a ground squirrel and not a digger, then he decided we had authority to play in it. Strange logic. 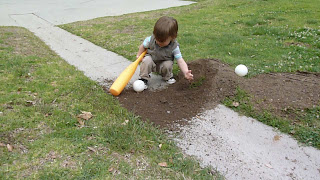 A nice genuine smile as we played peek-a-boo through the car window. 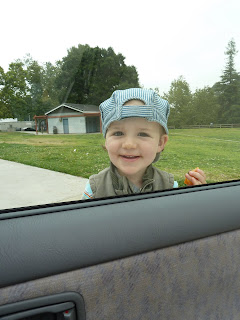 When I could no longer take the pre-dinner fussing this evening, I threw together a hodge-podge picnic for dinner and hauled the kids up to the Observatory. Neither of them can resist running on that lawn and I knew it would be a nice way to pass the time until Tim could finally escape home from his late work night. 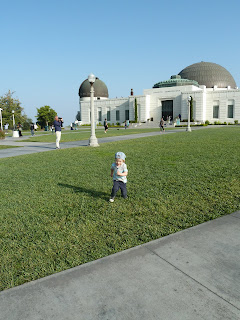 Porter has to have his hat on at all times because his hair is so long he can't see out. I fear my own haircutting phobia is starting to impact the poor boy. 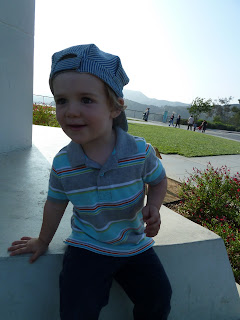 The whole wear-down scheme seemed to work, for today at least, since he went to sleep with (almost) no fuss at a quite reasonable bedtime.
Posted by KK at 11:07 PM