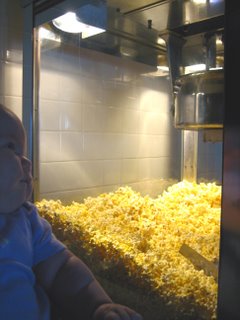 So we ventured out for our first Mommie & Me screening this morning. M gave Friends With Money two thumbs down, although I tried to convince her it is not really fair to judge the movie if she didn't watch the entire thing. I was hoping she would nurse/nap for the duration of the show but she slept from 8:45-10, which did not bode well for our 10:30 show time. She quietly enjoyed the movie for about the first half. After that M began not-so-quietly voicing her complaints with the plot and tried to convince the other babies to revolt with her.

I actually think she may have just been bored with the dark room. Each time I took her out into the lobby she immediately stopped crying and was content to look around. Either that or she was pissed to find out there would be no popcorn for her in the near future. We will try again next week and see how she fares.
Posted by KK at 12:03 PM